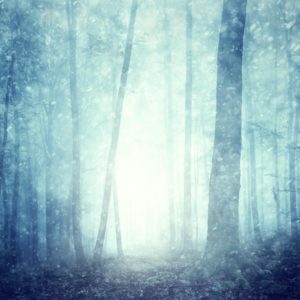 Maybe it’s the recent near-daily onslaught of concern about Russian involvement in the United States’ most recent presidential election—not to mention social media, and whatever else the top spy-catchers have determined may have been compromised—but it reminded me of days long ago, when I was unwittingly cast in the role of corporate spy, just because I’m naturally intuitive and psychically attuned.

Here’s the backstory. The first in my family to go to college, I was thankful for an engineering scholarship to a state university. My family was hoping that something as logical and mathematical as engineering would shut down my embarrassing psychic moments and mediumistic episodes. Even today it’s tough for children who are naturally intuitive, so I naturally wanted to Just. Make. It. Stop.

The “boys club” of engineering school at that time was a challenge, so I changed majors and graduated with honors in Economics. Thanks to that engineering training, as well as useful-to-the-corporation language skills, a job was created for me upon graduation; I worked with an international engineering team. Because I wanted to continue my education, I then went to work for a bank in its economics department; a free master’s degree was one of the perks. Just weeks after graduating with my MBA in International Marketing, I started a new gig as the communications manager for a Fortune 500 company.

The company required an intensive psychological testing protocol of people it wanted to hire, covering everything from intellectual aptitude to what today we call emotional intelligence or EQ, terms popularized years later by Daniel Goleman. My off-the-charts score in “social aptitude” was noted and enthusiastically discussed in the latter stages of the interview process. Although it struck me as odd even then, I thought I was being brought on because of my newly minted MBA and skill set. At 27, I was too naïve to realize what was really going on.

I later learned that my new manager, the vice president of engineering, had hired me to be a sort of covert psychic spy. “Rich” had long been fascinated with psychics and mediums, although I didn’t know that at the time. I hadn’t come to terms with my abilities myself. I was trying to hide after all—that’s what engineering, economics, and MBA training were for: suppressing my natural intuitive and psychic self.

Very early in my tenure at the corporation I began to be flown around the country to attend high-level meetings, under the pretense of gathering information about communications strategies of the various divisions of the corporation, which of course I did. That was on my job description.

But I would then be asked to inform the CEO and other top executives from headquarters in another state about other matters. What I’d felt the executives’ unspoken agendas were. Who I perceived was aligned with whom. Who I sensed was possibly preparing to leave for the competition. Who I felt could be trusted. Who I thought was a rising star they hadn’t yet noticed. That wasn’t on my job description.

But I did what I was asked to do, filing even these unusual requests under the broad term “communications.” After all, I was communicating. And I was younger than my colleagues by 10 to 20 years, and knew, as the youngest and the only female, that my ability to refuse assignments that unnerved me—and these assess-and-report missions definitely bothered me—was nil. Plus, the attention from top levels was endorsement, or so I thought, of my skills—the ones I listed on my resume, at least.

Eventually I learned the truth on a business trip with my colleague “Joe,” who’d known all along about the plan to hire someone with strong intuition. He was even one of the team members who interviewed me.

Over dinner in New York one Thursday, after a third day of meetings, Joe and I were discussing the trip and musing about upcoming changes at the corporation. Rich had retired, and I was hoping for a promotion.

Then Joe remarked, “You do your job well, really well, but that’s not the point. My wife is a tarot card reader; I know what you are even if you don’t: you’re psychic. And that’s exactly why Rich brought you on.”

Since our former boss was now retired, apparently keeping this confidence mattered little to Joe, and I’m glad he leveled with me—although I was so stunned to realize that my job-related skills were secondary to my intuitive sense that I nearly face-planted in my salad. It hit me hard. There was no chance I’d be promoted. Who would trust the corporation’s de-facto internal psychic spy, even though I’d never been told that’s what I was?

I was dismayed of course, but my curiosity was piqued. After “outing” me, Joe eventually admitted the entire team I worked alongside had known of Rich’s plan to bring on someone with psychic talents, as well as those required for the role, from the outset. What had Rich and the others seen? I obviously wasn’t hiding my psychic self very well, and decided to figure out what signals I was sending, as well as educate myself by reading everything I could find about psychics and mediums.

From Journalist to Psychic Medium in a Weekend

Soon after this decision, I left the corporation, as it was a target for a hostile takeover and focused on freelance writing and a return to graduate school. After noticing a that a large psychic fair was coming to the city I lived in then, I asked the city newspaper if I could cover it, mostly to give me a reason to ask all the questions I had. (And also to get in free as a journalist.)

The next weekend I spent two days wandering a large trade show space, filled with vendors and psychics and lecturers and booksellers and what seemed every like variety of gullible new age fan ever assembled. I was definitely not a believer.

Reflecting on this experience, I have to laugh. I was so clearly a psychic and medium. I had always been. And it was apparently obvious to the people at this giant new age expo, too—just as it was to my old boss Rich and colleague Joe. As I went about my journalistic duties, interviewing visitors, lecturers and vendors, I was repeatedly asked if I was doing readings.

Readings? Yes, I liked to read. That’s not what they meant. When the owner of a large bookstore who also hosted weekly psychic fairs over 100 miles away asked me to work at her event coming up a few weeks later, I decided it was a great way to determine what was really going on. Either I’d fail or I’d succeed—and whatever happened, I’d know more than I did at that moment.

“Coming Out” as a Psychic Medium

At that first psychic fair, the event producer laughed when I showed up in a charcoal gray pencil skirt, a purple designer blouse (with pearls), and mid-heel pumps. She said I looked like a business executive. Which, until very recently, I had been. I felt quite out of place among the gauzy flowing skirts, dangling earrings and jangling bracelets of the other “readers” at the psychic fair.

Though completely out of my element, I did my best to adapt to this new environment. And apparently it worked. The event producer later told me I’d had more clients than anyone else (which created a whole other situation I had to deal with, having inadvertently upset my new colleagues), and asked me to appear regularly at her events. Which I did for the next few years as I attended graduate school in counseling and started my own private practice as a psychic medium.

Even though so many others—from that VP of engineering to the bookstore owner and event producer to the neighbors of my childhood and even my family I members—saw that I was a psychic medium, I still resisted. By going into the counseling field, my hope was that I could tuck my psychic mediumship under the umbrella of counseling. Wasn’t being insightful and perceptive—more acceptable synonyms for psychic—a good thing in that world?

Professors knew I was a psychic medium, and several consulted me, including one whose mother had gone missing. By using a technique called map dowsing I was able to pinpoint where she’d gone, which was several hundred miles from her home. Sadly she was found dead of natural causes, but word got around. Soon everyone knew what I really did, and yes, it was counseling in a way, certainly. But not in the usual way. When I won an award and grant for my dissertation about near-death experiencers, I was thrilled. It seemed as though the “woo woo world” and the “normal world” (if there is such a thing) were aligning.

When I completed my doctoral program, I’d planned to be a typical psychologist. And I did try. I really did. But soon I found that being a natural psychic medium—no matter how much I’d once wished I weren’t—put me in a unique place. I had gone to graduate school because I felt that most of the psychics and mediums I’d known weren’t prepared to assist people with deep emotional reactions to the information presented to them.

And far too often, I’d seen psychics refuse to refer the people who came to counseling or other forms of emotional support, instead stringing them along, acting as if they were mental health practitioners, although without the training. Many called themselves psychic, intuitive or spiritual counselors. The difference was, I was actually trained and licensed as a mental health counselor.

But I also couldn’t keep from seeing into traditional counseling clients’ lives through the lens of psychic mediumship, because it’s just part of who I am. I often heard things like, “How did you know that? Are you psychic or something?,” followed by a nervous laugh. Once I said to a client, “It’s as if you’re a bird in a gilded cage, from the fairy tale.” All the color drained from her face as she said, “My sister is an artist. She gave me a painting of a bird in a gilded cage the other day.” Just like in my previous life in corporations, I was finding that people’s fear of my natural psychic sense was making working with them a challenge.

I had both the the natural mediumship and the deep training in counseling. So I decided to just own being a psychic medium. Why fight your calling, even if you resist it at first? Or for years? Since then, I’ve never looked back, or even once regretted my choice. And the grounding of extensive training in mental health has aided me in many situations, particularly in helping parents of highly psychic children who are being told their child is unusual, or even abnormal.

In fact, I feel privileged that I have many clients I’ve worked with for 20 years or more, from all over the world. These days I’m delighted to see the children of clients as clients. (Yes I’m getting older, but that’s a good thing, compared to the other options!)

Everything Old is New Again

I only wish the environment were different for my clients who work in the corporate world I left behind. Many report that it’s still a challenge to be intuitive in a structured setting like a large corporation. While valued, intuition is also feared. Why?

Shouldn’t we use both our logical left brain and our intuitive right brain? That’s what I hope to do each and every time I assist someone in need of support. And hopefully the world is changing. We need all the help we can get—and so what if it’s from the spirit world?

As my forensic mediumship clients often say, they just want to find answers; they don’t really care where those answers come from as long as they help solve a case.

Why not just use what works, even if it seems outside the box?